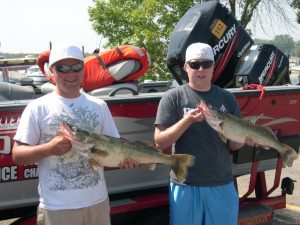 Looking for some great summer fishing? Well, look no more. 1st Choice Fishing Charters fishes on the eastern basin of Lake Erie. Anglers travel from all around the country to test their skills and their tackle here. The Lake Erie walleye fishery is back and is better than ever, but don’t take my word for it, just ask any walleye angler. If you want more concrete proof, ask the New York State Department of Environmental Conservation (NYSDEC) which has been monitoring the fishery for last 25 years. They’ll confirm that angler catch rates in the last 5 years are among the best in history. In fact, many anglers participating in the numerous Lake Erie tournaments here often catch monster walleye that weigh 11, 12, 13 pounds and more. True walleye giants! 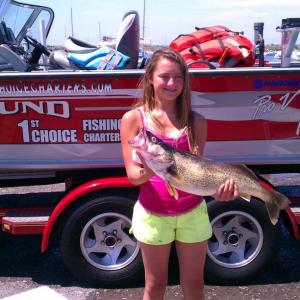 The higher catch rates are indicative of Lake Erie’s large walleye population which numbers in the tens of millions. In the eastern basin of Lake Erie between Buffalo and Barcelona, along the New York shoreline, we are famous for trophy-size fish (8 to 10-pounders!). In spring walleye prefer the shallow, productive waters in Lake Erie’s western basin as spawning grounds, but come late spring and early summer, these fish migrate eastward to the deeper waters located off New York’s shoreline. With an average depth of 81 feet here, they find the forage fish (bait) that prefer cooler water temperatures and the walleye thrive here. The eastern basin deep water ports off Dunkirk and Barcelona support a summer offshore fishery that is nothing short of stunning. I’ve been running Lake Erie Walleye Charters for many years and will do my best to make your day of Walleye fishing on Lake Erie both enjoyable and productive. I have both the experience and state of the art equipment to help locate and stay on top of the fish. 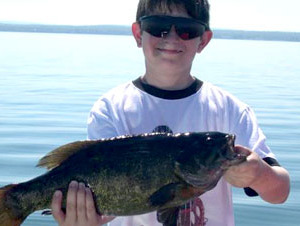 The finest smallmouth bass fishing in New York State and, arguably, the entire United States, can be found in the waters of Lake Erie. Smallmouth Bass, we call them “bronzebacks”, are found along the entire New York shoreline from Buffalo to Pennsylvania, with hotspots along rocky structure and drop-offs in 15 to 35 feet of water. Most bass caught are between 2 and 4 pounds, but there is good opportunity to catch a hefty 5 or 6 pound trophy bronzeback. Who wouldn’t want to go trophy bass fishing? The last five New York State record smallmouths have come from Lake Erie, with the current record standing at an impressive 8 pounds, 4 ounces. Captain Randy’s Boat Record stands at 6 pounds, 2 ounces. New York State Smallmouth bass record is 8lbs. 4oz. caught by Andrew Kartesz in Lake Erie in 06/04/95. 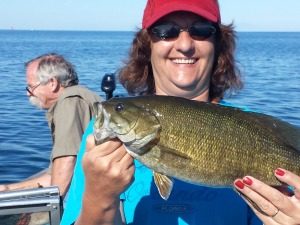 In Erie and Niagara County. Smallmouth bass are the most frequently caught fish species in Lake Erie and fishing trips for smallmouths make up about 25% of my Lake Erie fishing trips for the entire year. Anglers travel from across the country to fish for these Lake Erie bronzebacks. Bassmaster Elite Series also periodically makes tournament stops at our top smallmouth bass fishery out of Buffalo, New York, and tournament catches make for spectacular television shows. Anglers can enjoy the early trophy bass season on Lake Erie to take advantage of the unforgettable fishing available for smallmouth bass during spring.