Rainbow Trout (Steelhead)Two distinct strains of migratory rainbow trout called “Steelhead” are stocked into Lake Ontario and Lake Erie. These are Washington (a winter run strain) and Skamania (a summer run strain); both originally came from the State of Washington. These strains are native to Pacific coast watersheds of North America and Asia. 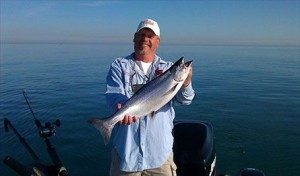 Mature Washington Steelhead begin to enter Lake Ontario tributaries in small numbers in the fall, as early as mid-September. By mid-October the run intensifies as water temperatures in the streams drop to the optimum range of 45-58 degrees for migration. The late October thru November period, before water temperatures get cooler than 40 degrees, is typically one of the best times to fish for Washington Steelhead, as they are aggressively feeding. As water temperatures drop into the 30’s, the run will slow considerably, however brief warming periods will bring new fish into the tributaries throughout the winter months of January and February. Spawning usually begins in Mid-March and continues through late April. After spawning, the fish begin to drop back downstream to the lake. Hungry and no longer distracted by the spawning ritual, these “drop-back” fish begin to feed heavily and can provide excellent fishing on some tributaries into mid-May.

Skamania are a summer run/spring spawning strain of Steelhead which was developed by the State of Washington from wild stocks on the Washougal River. Currently Skamania strain Steelhead are only stocked in the Salmon and Little Salmon River’s. These fish can enter the river as early as May with the bulk of the run coming in the June – September period. Skamania fishing tends to be “hit or miss” and is very dependent on the river condition. Conditions which can stimulate a run on the Salmon River are special recreational water releases or rising water levels caused by heavy rain showers. Skamania tend to race up the river quickly, so timing is critical. Your best chance of catching one of these powerful fish is during and immediately following one of these periods of increased flow. Even though Skamania enter the river during the summer, they will not be sexually mature and ready to spawn until late February through early April.

The most popular natural bait used when fishing for Steelhead in the tributaries is trout or salmon eggs. They should be tied up in sacks about the size of a dime.