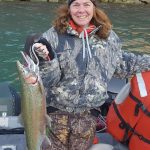 Two distinct strains of migratory rainbow trout called “Steelhead” are stocked into Lake Ontario and Lake Erie. These are Washington (a winter run strain) and Skamania (a summer run strain); both originally came from the State of Washington. These strains are native to Pacific coast watersheds of North America and Asia.

Mature Washington Steelhead begin to enter Lake Ontario tributaries in small numbers in the fall, as early as mid-September. By mid-October the run intensifies as water temperatures in the streams drop to the optimum range of 45-58 degrees for migration. The late October thru November period, before water temperatures get cooler than 40 degrees, is typically one of the best times to fish for Washington Steelhead, as they are aggressively feeding. As water temperatures drop into the 30’s, the run will slow considerably, however brief warming periods will bring new fish into the tributaries throughout the winter months of January and February. Spawning usually begins in Mid-March and continues through late April. After spawning, the fish begin to drop back downstream to the lake. Hungry and no longer distracted by the spawning ritual, these “drop-back” fish begin to feed heavily and can provide excellent fishing on some tributaries into mid-May.

Skamania are a summer run/spring spawning strain of Steelhead which was developed by the State of Washington from wild stocks on the Washougal River. Currently Skamania strain Steelhead are only stocked in the Salmon and Little Salmon River’s. These fish can enter the river as early as May with the bulk of the run coming in the June – September period. Skamania fishing tends to be “hit or miss” and is very dependent on the river condition. Conditions which can stimulate a run on the Salmon River are special recreational water releases or rising water levels caused by heavy rain showers. Skamania tend to race up the river quickly, so timing is critical. Your best chance of catching one of these powerful fish is during and immediately following one of these periods of increased flow. Even though Skamania enter the river during the summer, they will not be sexually mature and ready to spawn until late February through early April.

The most popular natural bait used when fishing for Steelhead in the tributaries is trout or salmon eggs. They should be tied up in sacks about the size of a dime. 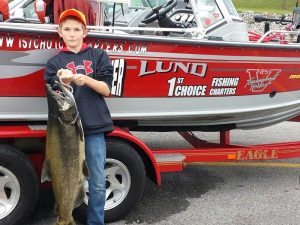 New York State’s Salmon ( Niagara County) are some of the largest and most eagerly sought gamefish found in northeastern freshwaters. Images of silvery leaping fish and singing reels quickly yielding line often come to mind when anglers recall, or anticipate, encounters with these fish. A diverse group of fish, Salmon are found in a variety of settings ranging from the vastness of Lake Ontario to it’s many tributaries, including the Upper and Lower Niagara River. Salmon Fishing with 1st Choice Charters can you give you access to all of these great Salmon fishing opportunities. 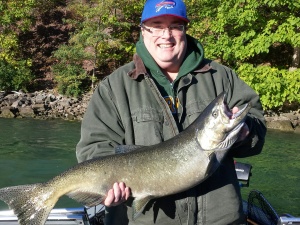 Also called Chinook Salmon, King Salmon are the largest of the Pacific salmon. While specimens exceeding 100 pounds been taken on the Pacific coast, New York State’s record fish is a 47 pounder caught in Lake Ontario. Chinook Salmon have a limited distribution in New York State and are only found in lakes Erie and Ontario.Non-natives of New York State, Chinooks were first stocked into the Great Lakes in 1873. Although they were sporadically stocked throughout the years, it was not until about 20 years ago that they became abundant. At that time, New York State aggressively stocked Chinooks into lakes Erie and Ontario to provide a sport fishery. Using the then tremendous population of alewives as a food source, Chinooks thrived and produced a spectacular sport fishery. Since there is not enough suitable spawning and nursery area to naturally produce enough fish, most of the salmon caught in New York State’s Great Lakes are hatchery-reared and stocked as fingerlings. The results have been spectacular for the last 40 years. Join me for this world class fishing! 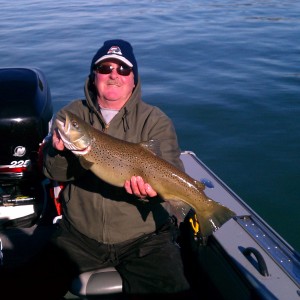 The brown trout has long been a popular game fish all over the world. Brought over from Europe in the 1880s, brown trout can be found in waters all across New York State. Brown trout are primarily found in streams, but also live in ponds and lakes. As the name implies, brown trout are brown in color with black and often red spots on the sides. However, in large bodies of water, fish tend to be silvery with scattered black spots, allowing them to be termed a “handsome fish”. Brown trout are generally faster growing and longer lived than brook trout. In the Lower Niagara River and Lake Ontario, fish more than ten pounds are fairly common, while in streams they seldom grow larger than two pounds. Many anglers enjoy fishing for brown trout because they are relatively wary and a challenge to catch. Brown trout can withstand heavy fishing pressure better than other New York trout. In streams, Brown Trout are durable and can withstand heavy fishing pressure better than many other New York trout species. The main reason for this is that brown trout are more active at night and can be hard to catch in the daytime. In streams, the biggest brown trout are caught after dark, or early morning especially during the summer months. In Lake Ontario, brown trout can be caught at any time of the day and usually reside deep at point where the thermocline meets the bottom in summer. The New York State Brown Trout record stands at 33 pounds 2 ounces, caught in 1997 in Lake Ontario. Come join me! If you want to experience some great Brown Trout fishing, I know many spots in the Niagara River and Lake Ontario that consistently hold large numbers of Brown Trout in the Fall and early Spring. I also know some great techniques for catching summer Brown Trout along the shores of Lake Ontario.